Some things I have done for me, that might be also useful for others.

This is an experimental section. In the future I may add some more chapters. Or maybe not.

Current Streamstar Live Sports Production And Streaming Solutions have no built-in hardware interfacing solution for “standard” broadcast camera tally light. Such an interfacing means a contact closure for the corresponding on-air camera, via GPI port connected to that camera CCU (or any other GPI-based camera tally solution). Perhaps not such a big issue for the way some studios or broadcasters are working today, but possibly a true problem for those who really need it. 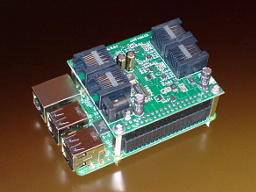 The VifuLens is an interface designed with the aim to provide remote control for B4-mount broadcast lenses and PT(Z) head, using VISCA commands sent over a TCP network. It comprises of a microcomputer connected to the LAN, an analog interface that connects directly to the zoom, focus and iris (ZFI) connectors of the lenses and a RS-232 serial port that connects to the pan and tilt head (PT(Z)). While originally designed for Fujinon broadcast lenses and PTZOptics broadcast pan & tilt head combination, it can be adapted to other scenarios as well.

I started developing this hardware interface and its related software within a specific project I worked on, where a system consisting of several Micro Studio Camera 4K cameras, MTF B4 lens adapters, ZA17x7.6BERD lenses and PT-610 / PT-BRDCSTR-P PTZ heads had to be installed. The interface turned out to be a necessity, because the PTZ head controller model, which was specifically requested for that project, has been originally designed to connect to remote lens control of compact camcorders, not to independent B4-mount broadcast lenses type which usually equips ENG or EFP cameras.

Note: the PT-610 broadcast pan & tilt head appears now to be discontinued by PTZOptics, but it may be still available from VHD company .

One day I was asked to redraw the layout and video operating area of a medium‑sized television O.B. Van from the Studio Video Art company. The central video router, used also for camera technical control, was a Blackmagic Design (BMD) Compact Videohub.

The camera operational control panels (OCPs – named as such in the specific case of that equipment; may differ in other situations) were equipped with joystick type control for iris & master black adjustment, with the possibility of “Joystick Override” operating mode: individual per‑OCP contact closure when its joystick is pressed. Sometimes this is referred also as touchdown function or joystick preview. 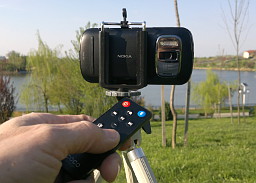 Ever wanted to put the 808 Pureview on a tripod and take a picture of yourself while standing at some distance from the camera ?
Now this can be done even more easily than with the built‑in self‑timer !

Notes:
This article refers to Symbian^3 based Nokia mobile phones, in particular 808 PureView and N8 models.
The solution provided here is most suitable when the mobile phone is used in conjunction with a tripod, not with a selfie stick.
The solution provided here is based on a third‑party application installed on phone, used in conjunction with a Bluetooth remote control originally designed to be used with Apple devices; other particular Bluetooth remote controls may work as well, in case they happen to use the same key codes. Feel free to experiment !

It happens that I have an ASUS R700 GPS device. Although a good piece of hardware, ASUS has dropped the software support for it, leaving the users only with map updates possibility (from Naviextras site) – but even this one only until 1 May 2016, the date from which map updates support for this device has also been dropped.

The original ASUS GO GPS application provided with the R700 was from the beginning (and remained) a sort of beta version of the Nav N Go iGO GPS application, with poor or broken automatic map overview in 3D mode, occasional software crashes and skipping full support for possibly additional map features on newer map versions. The latest software update from ASUS site occurred in 2008.